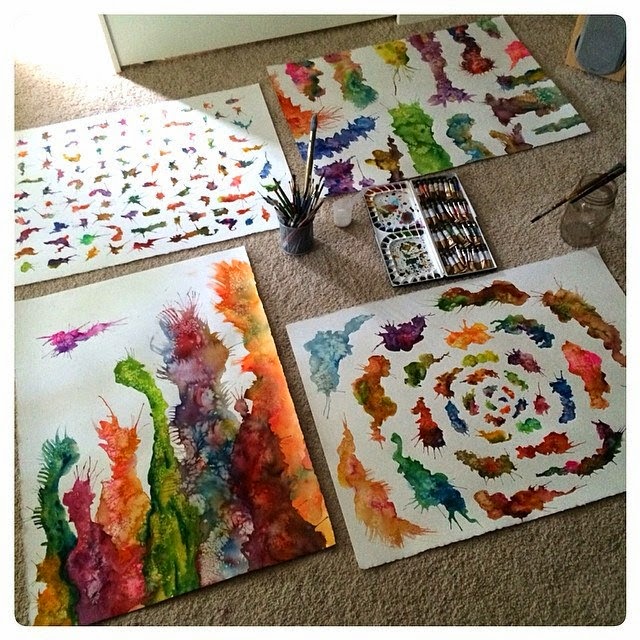 Yes, the Splotch Monsters have been hibernating in a long state of dormant slumber for quite some time now. Not any longer! Yesterday I hit the downstairs studio to finally begin work on some brand new larger-scale pieces. It was such a good feeling to get back into the groove of Splotch Monster-making once again, and June through August will be see consistent and significant progress. I've been working with some older, more familiar variations on previous compositions, as well as some new and exciting configurations. Using some top of the line materials hasn't hurt either. I'm still on the fence whether to post more about this as I continue, or keep it all on the down low until I get closer to my solo show at the Off-Rhode Studio (Art Enables) in Washington D.C., happening, I believe with an opening reception on Saturday, September 13th, 2014 (most likely from noon-4pm) and ending around friday, October 3rd, which also happens to be my birthday. Then I'll be opening the new season at Art Enables with a fresh new Splotch Monster-making workshop the following Saturday, October 11th, again, probably from noon - 4PM. These dates and times aren't definite, but they're 99.9% accurate, and even though it's about three months away, time will indeed fly.  I will make sure to post definite dates and times as we get closer to the exhibit. In the meantime, a very old school track from Canadian Industrial music legends, Skinny Puppy,  sounding like an early precursor to their classic track, Assimilate, and just as new as it was when it was released in 1984.