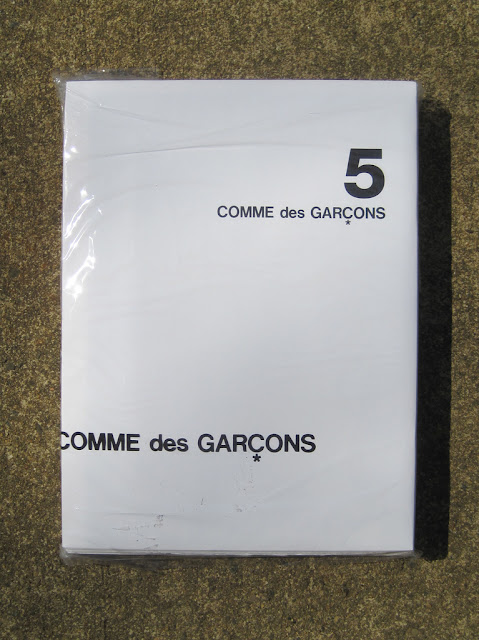 Here's a big post for the month of April. Finally it's feeling like spring this way and there are a lot of good things happening on the art front to blog about.  So let's get this party started, shall we?  First off, I've been excited to share this on the blogs for a little while now, and now I finally can. A few months back JJ Cromer, who collaborated on the Splotch/Asterisk series of drawings with me last year, contacted me to tell me the good news with regards to Tokyo, Japan-based fashion company Comme des Garcons. It turns out they chose one of our collaborative pieces from the S/A series to feature in their April, 2013 promotional mailer. What a pleasant, unexpected surprise for the both of us! Each and every year they choose artists to represent a theme, and this year they chose anime/manga classic Akira, merging a handful of artists' work with the original manga art by Katsuhiro Otomo.  Art heroes like Ai Weiwei have worked with Comme des Garcons in recent past, making me even more glad to see our work included as the centerfold of the current mailer.  I borrowed the idea for the presentation of this part of the post from a blog post by JJ, HERE. 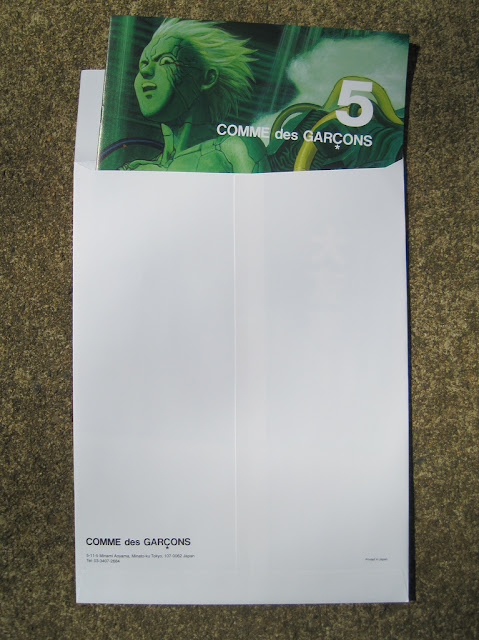 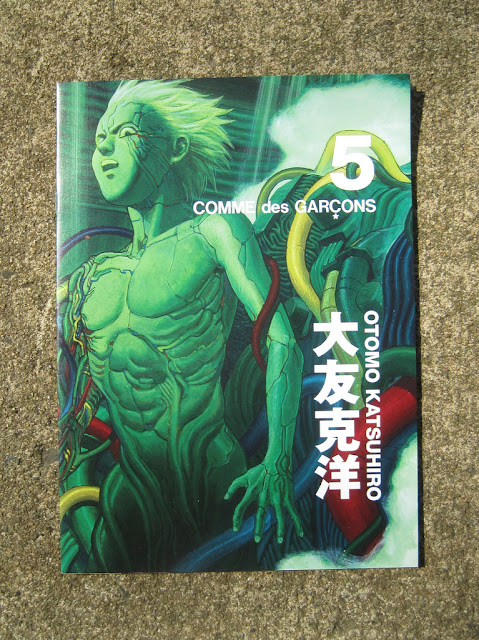 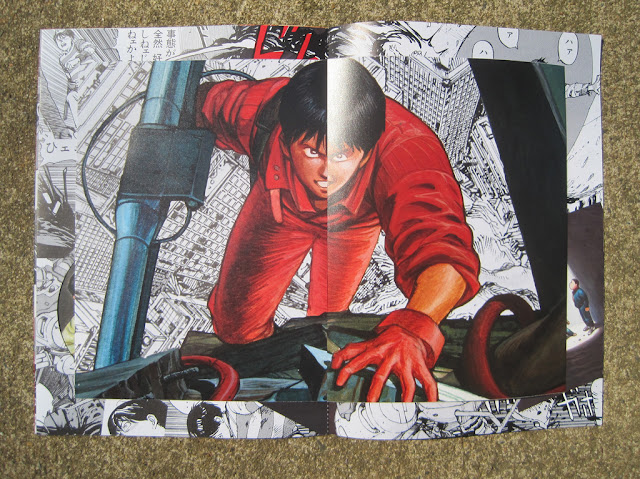 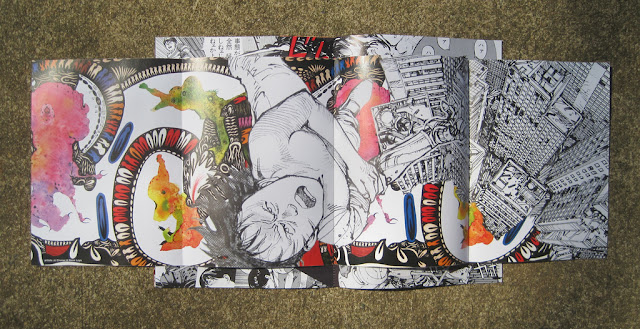 Below is another collaborative project I was asked to participate in by D.C. comic art star and graphic designer Carolyn Belefski. Carolyn contaced a handful of local cartoon and comic book artists, mainly from the DC Conspiracy collective to create a "thank you" card for businesses who sponsored the recently released Magic Bullet 6 paper, curated by Carolyn, who also illustrated the latest cover. Contributing artists received a randomly chosen letter to work on and include in the card, mine being a two-headed Splotch Monster K. I'm looking forward to receiving the actual card itself soon, in the mail, as well as picking up an issue of M.B. 6, which I unfortunately didn't have the time to be involved in this time around. The card turned out beautifully however, and I'm proud to have my letter included up there with the work of some of the finest cartoonists in the area. Below is a look at the layout, compiled and designed by Carolyn. 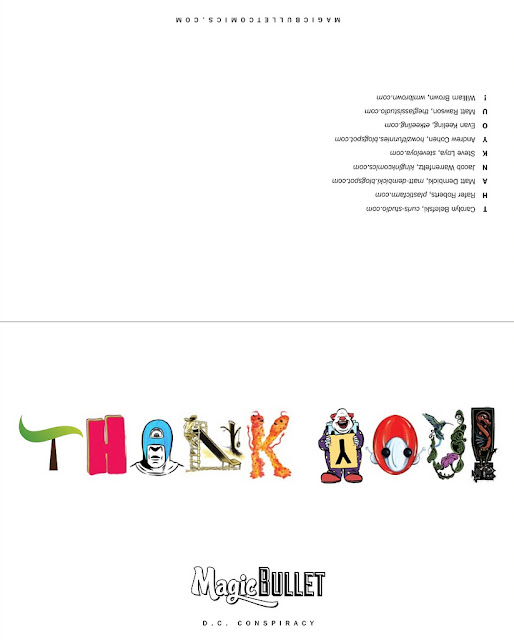 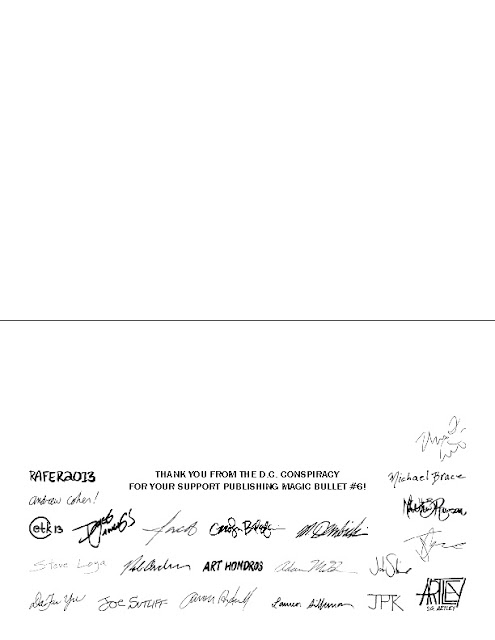 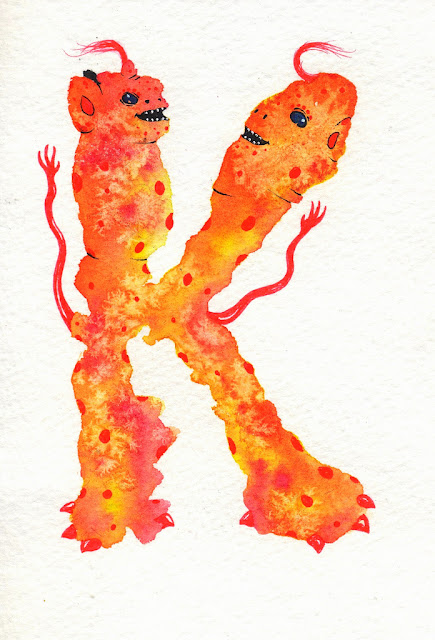 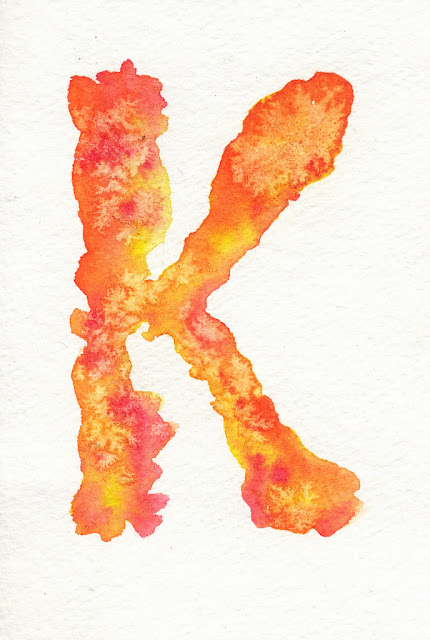 Speaking of Splotch Monsters and letters, I was happy to make a piece for our friends Beth and Randy, who recently brought a little man named Brandon into the world. It was so much fun working on this piece and a pleasure making it for these guys. Kris and I finally got to meet little Brandon in person, and as the photo shows, he couldn't be more adorable. Kris affectionately, officially calls him "cheeks" now (which she does with most babies), and hopefully he likes his new Splotch Monster friends hanging on his bedroom wall. Big congrats Randy and Beth! 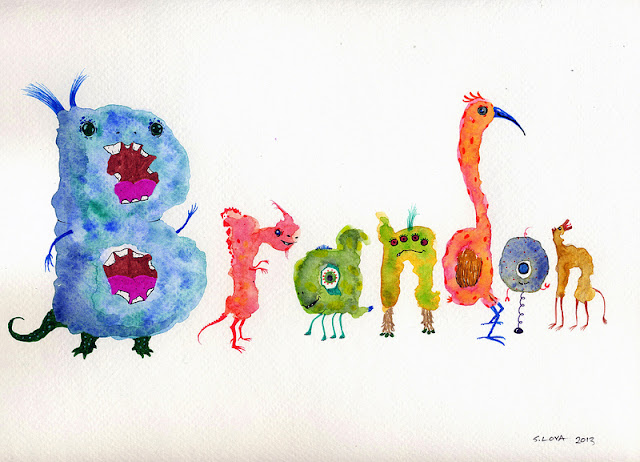 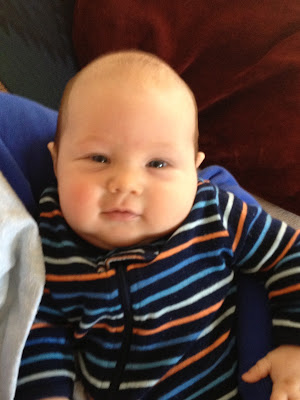 Last weekend, Kris and I had an art date in Washington, DC, which we're hoping to turn into a monthly event from now on. There's so much to see and do, and most of it is for free! First off, below are some photos from the latest exhibit opening at Off-Rhode Studio called "One Man's Trash". All I can say is my mind has been officially blown by the work in this show, featuring two very different yet very similar artists.  The first six photos below show some of the work by local artist Chuck Baxter, who has been collecting trash and turning it into some incredibly imaginative and witty works of art for nearly two decades now. I got to talk to Chuck (see third pic down from here) very briefly, and he's one of the nicest (and tallest) guys around. 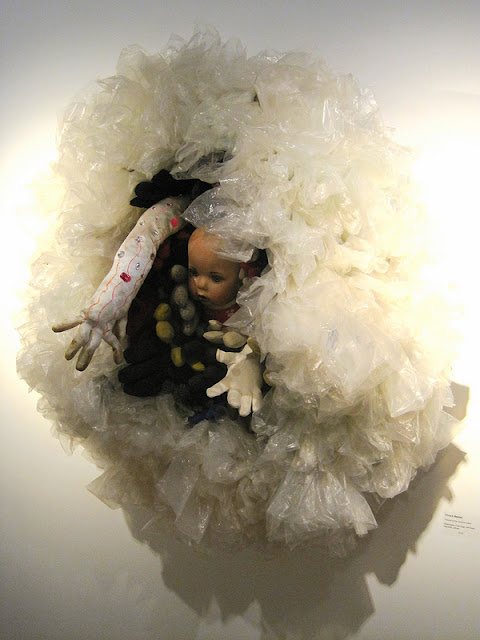 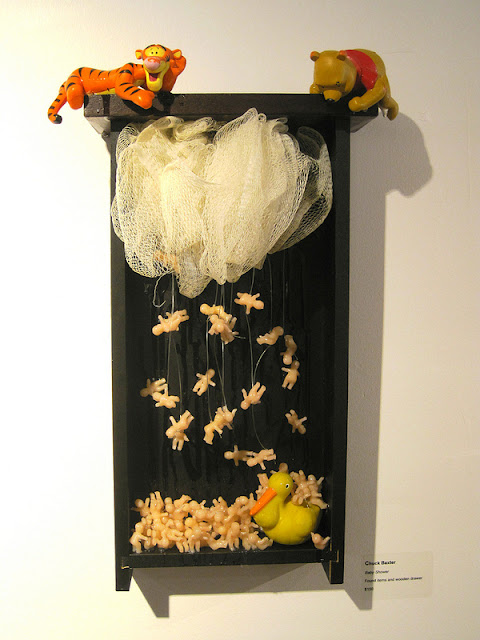 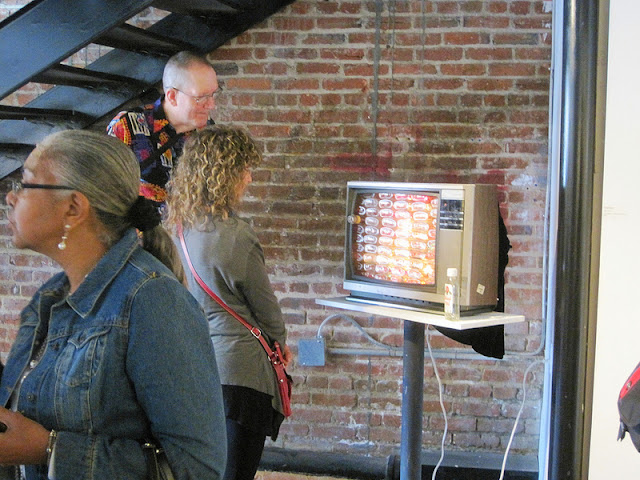 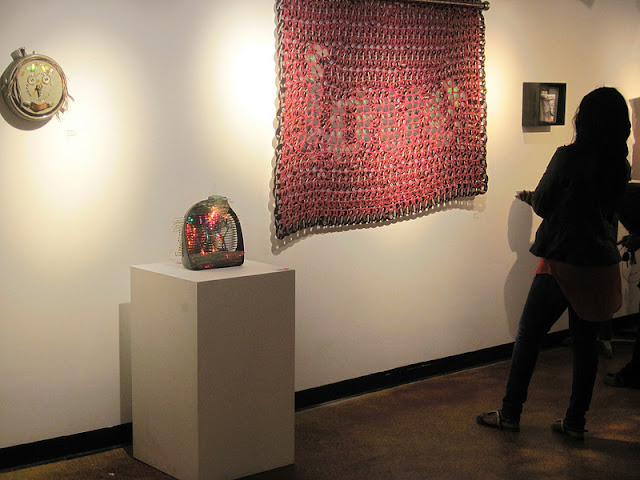 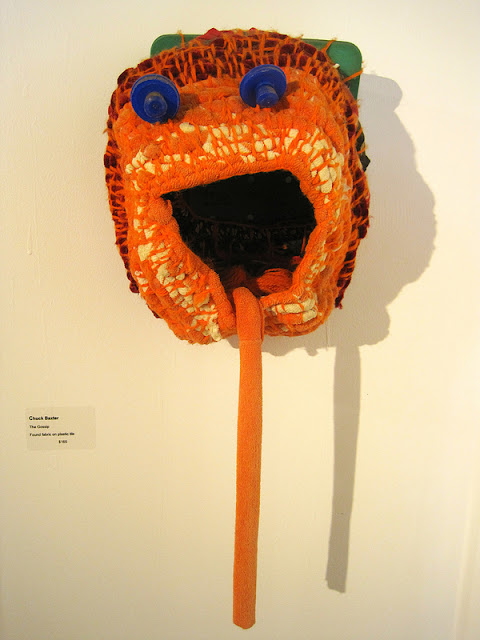 Also at the Off-Rhode show was the work of Mr. Rey "Quinnessential" Quinn, who creates portrait art from the styrofoam cups he uses. I was told at the show that he basically washes the cups that he drinks from, from a local business, then simply draws on them. The results, as you can see are stunning. I had trouble picking favorites, so I included some of them here, however you can see many more from the show at my Flickr site. With the exception of opening reception events and artists and collector talks, Off-Rhode Studio/Art Enables is closed on weekends, so try to get on down there before 5PM to see it all in person.  Kris and I had a fantastic time at this show, and Art Enables is a prime example of how art can bring so many seemingly different kinds of folks together. 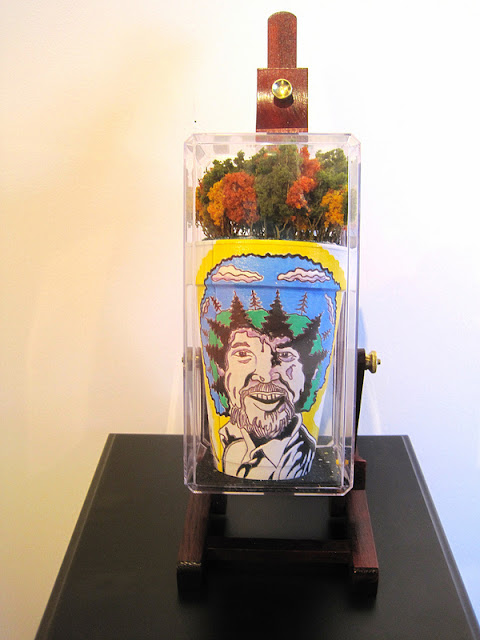 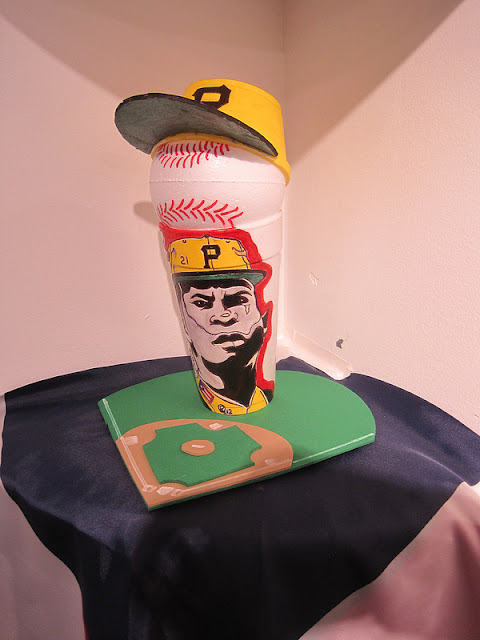 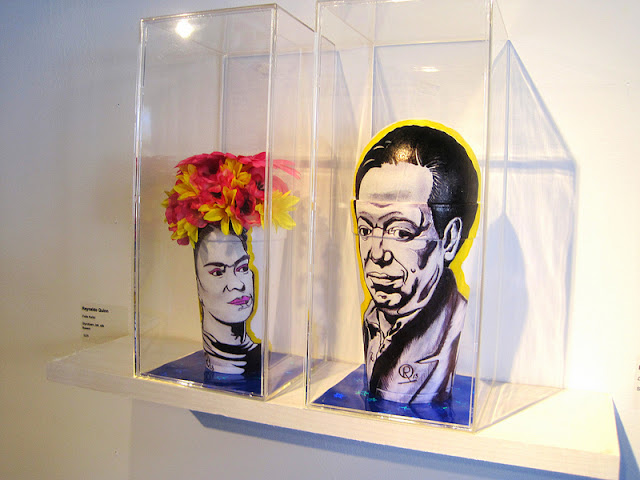 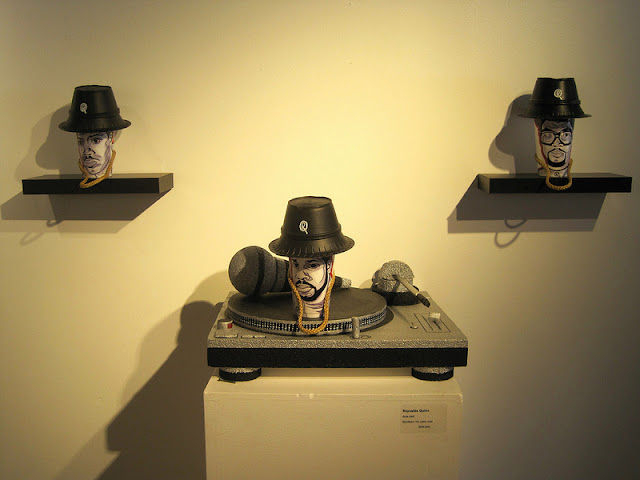 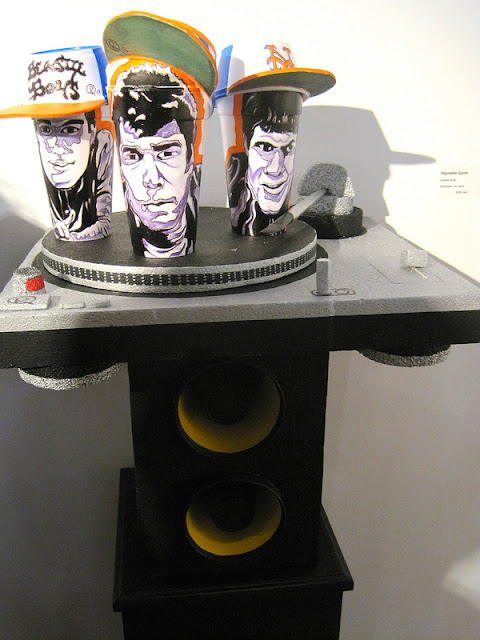 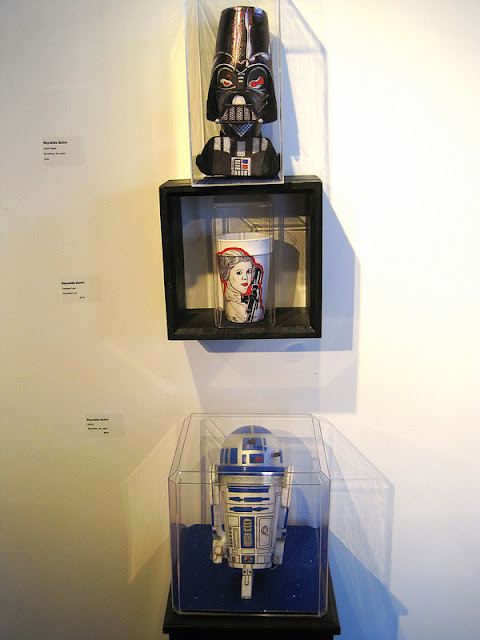 Next stop, The Phillips Collection.  Actually, The Phillips was the first place Kris and I visited last Saturday, as doors opened at 10AM and we managed to find meter parking right in front of the main entrance. Yes, they do charge on weekends and thankfully the meters take credit cards now. The Phillips Collection also costs money to view but it's inexpensive and well worth every last penny.  I can't even begin to say why, so you just have to go, period.  This was only my second visit, sadly, and Kris' first, and I know she was in awe as much as I was Saturday. My main reason to come by this time around was to see the current show featuring the collection of work linking Jackson Pollock, Alfonso Ossorio, and Jean Dubuffet, called Angels, Demons and Savages. Surprisingly, for me, the highlight of this exhibit were the small drawings by Ossorio, made when he fell ill and stayed in the hospital while in his seventies. I found them to be more immediate and just as powerful as the gigantic painted canvases in the show. I'm a sucker for smaller works on paper perhaps, and unfortunately, none of these drawings by Ossorio were in the exhibit book. I believe this Saturday, April 20 is the final day for the show, so don't miss it! 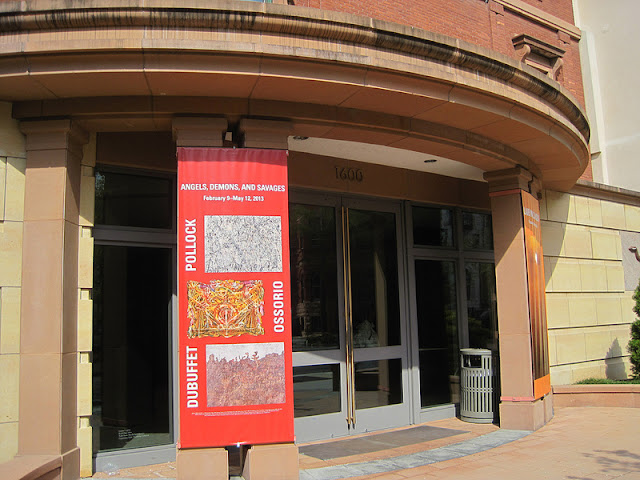 Finally, my friend and colleague Brian Kirk has a show at the beautiful Studio Gallery, which will also end this Saturday as well.  In addition to being an excellent teacher, Brian is an amazing sculptor, and more recently he's been exploring nature's effect on the process of art-making. In his own words: "I have always been intrigued with the forces of nature. I consider myself a naturalist and a curious spectator of natural phenomena. The natural actions of wind, water, fire on the ever-changing earth hold a fascination for me. I enjoy the cyclical forces; the ebb and flow of the tides, the changing stages of the moon, the emblazoned autumn leaves. My intention is for you to participate, as a naturalist, and examine the prints and sculpture for visual imagery, witness subtle variations in the rich palette of ochre's, oranges and browns and share in the wonderment of the natural phenomena - rusting steel." 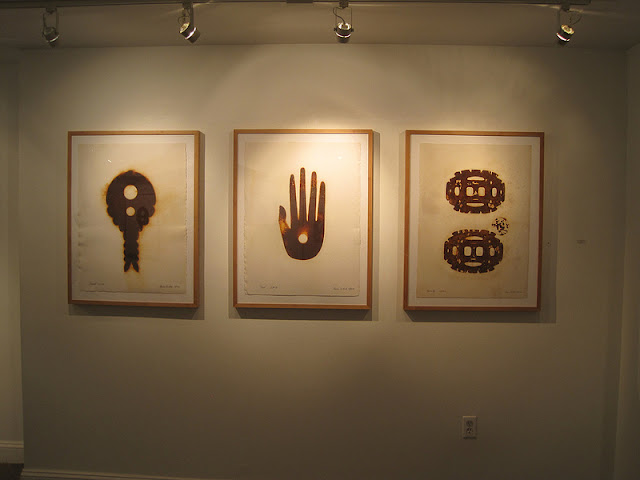 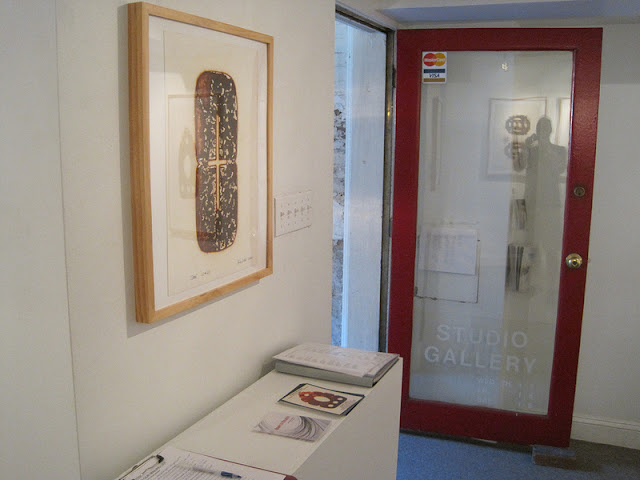 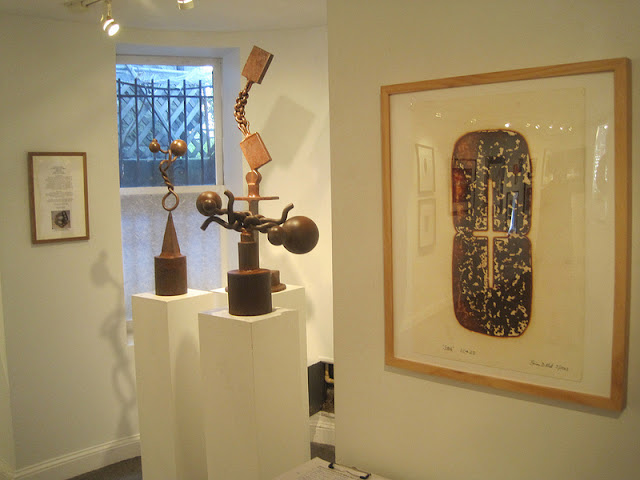 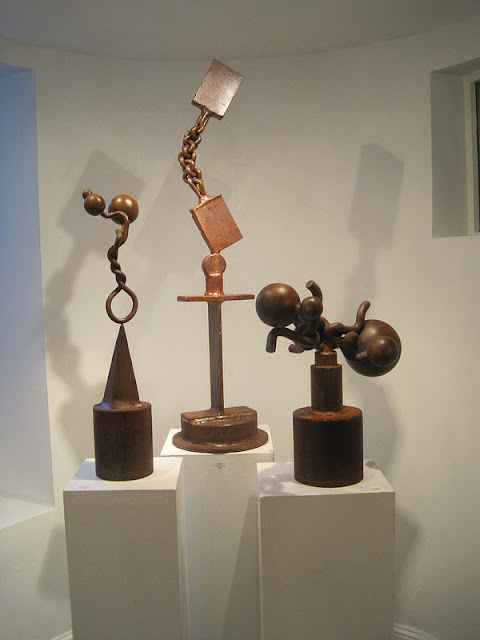 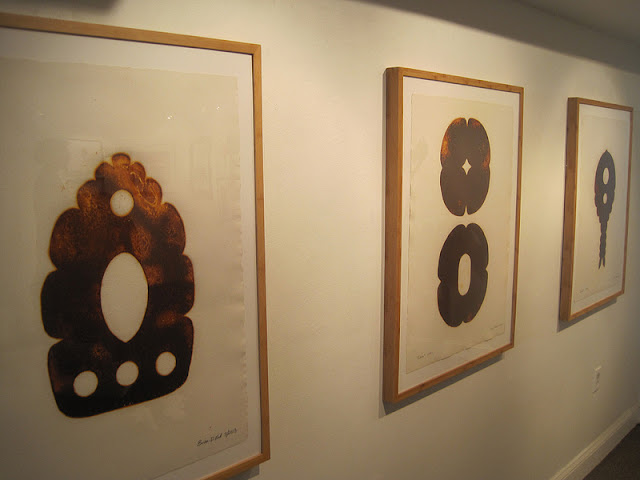 That is all for now. If you're in the Washington, DC area, don't hesitate to get there early by or before this coming Saturday (or anytime really) to check out the art. Plus, springtime is always beautiful in the area. Looking forward to another post in May! Peace. 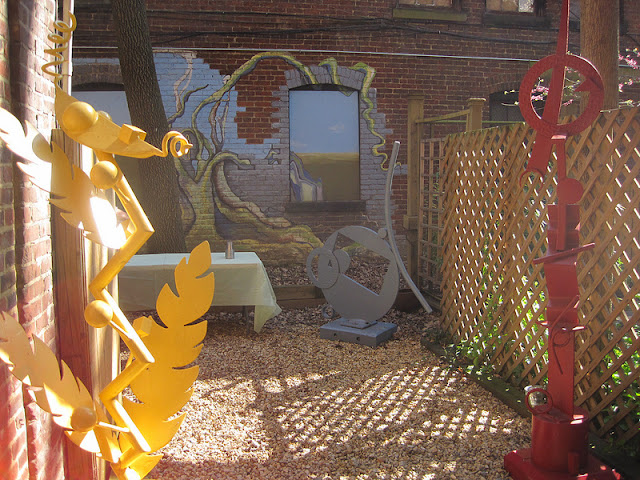 UPDATE: for fans of The Ocean Blue, Hershey, PA's finest are back, with new album and on tour now! Got my tix for the Jammin' Java show in Vienna, VA on May 9th. Be there!