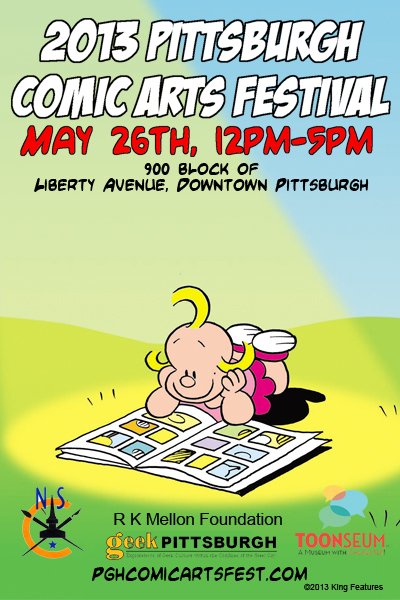 How cool is this? The Toonseum of Pittsburgh, PA will be hosting the first Comic Arts Festival downtown! In addition to a whole bunch of good things going on that day, a longtime favorite and a living legend in the comic art world, Patrick McDonnell (Mutts) will be there!! Kris and I have been to the Toonseum when it first opened several years ago, and it's a wonderful little space that packs a giant cartoon punch. It's been a while since I've dropped by, and if this is not a reason to go again, I don't know what is. Currently, a few great exhibits are going on there, including an art of Akira show, which ends in a few days unfortunately. Anyhow, here are some more details below, according to the blog:

Pittsburgh, PA-Hundreds of cartoonists are descending on downtown Pittsburgh as the city plays host to the National Cartoonists Society Conference. It is the first time the prestigious organization has been to Pittsburgh in its almost 70 year history.
In conjunction with the conference, The ToonSeum will be hosting the very first Pittsburgh Comic Arts Festival on May 26th from noon to 5pm.

The festival will feature autograph and sketch sessions with over 60 of the nations top comic artist and cartoonists including such luminaries as: Partrick McDonnell of Mutts, Lynn Johnston of For Better or Worse, Tom Richmond of MAD Magazine, Brian Walker of Beetle Bailey, Dan Piraro of Bizarro and many more.

The 900 Block of Liberty Avenue downtown will become a veritable living funny pages block party with visits from Betty Boop, Popeye, Olive Oyl, Dennis the Menace, and the Care Bears. Fun vendors, art activities, chalk artists and caricaturists and will round out the festivities and help to literally draw a crowd!
Several ticketed panel discussions and lectures will be taking place at Bricolage Theater featuring an exciting panel of women cartoonists presented by Carlow University. The Panel will include Cathy Guisewite, Lynn Johnston, Terri Liebenson, and Hillary Price.

The ToonSeum will host the first ever exhibition of Reuben Award winners featuring a who’s who of comics and cartooning spanning over 60 years and rarely seen original art.

At the August Wilson Center there will be original art from the classic animated series Fat Albert on display in their gallery.

Admission to the street festival is free.  Five dollar admission gets access to exhibitions at the ToonSeum and artists signing booths.

Books and prints for signings will be available for purchase with all proceeds benefiting the NCS/ToonSeum Fund for Youth Programs.

Panel discussions seating is limited and ticket price is $20.

On Thursday night, there will be Special VIP tickets available including a sneak peek of the exhibit, reserved seating to all panels, and private meet and greet with artists which are available for $150.00

Information on the festival is available at pghcomicartsfest.com
The festival is a partnership between the National Cartoonists Society, the ToonSeum, The August Wilson Center and Bricolage theater with support from the R K Mellon Foundation and Geek Pittsburgh. 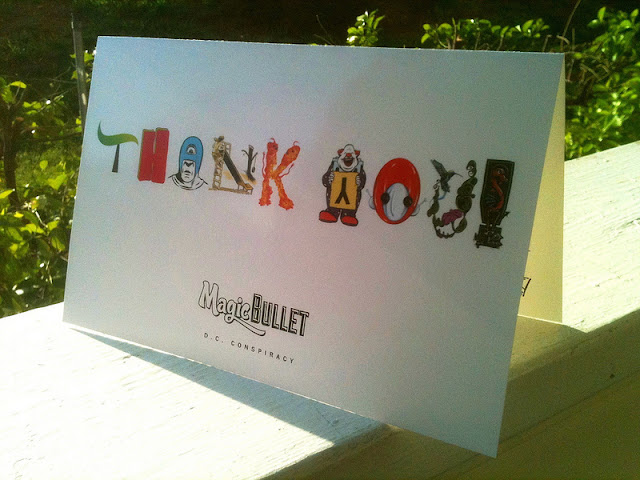 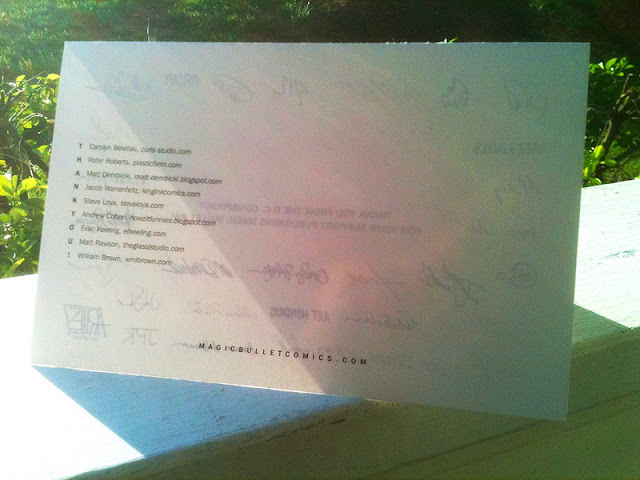 Speaking of cartoons, I received my physical copy of the Magic Bullet 6 "thank you" card in the mail today (see above) from Carolyn Belefski, and it looks pretty spiffy in person.  What a great way to honor the businesses who helped to make this publication happen! 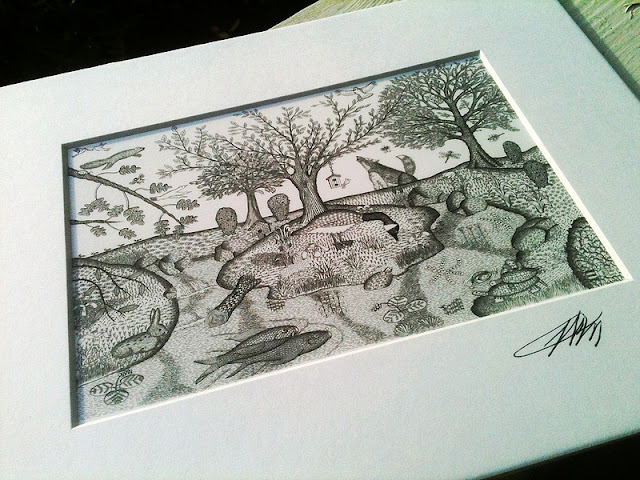 Today was a gorgeous day, and Kris and I spent the majority of it outside. We paid a visit to downtown Leesburg and stopped into my friend Allen's shop, "Books and Other Found Things".  Just as we walked in, a wonderful family who was moving back to their home country of Singapore was buying one of my "Get Lost in a Book" prints, which is naturally the best seller of all my Splotch Monster prints at the shop. It was nice to meet these folks and thank them in person before their long journey back home, and it made me happy to see some of my art branching out to another part of the world. Of course, the wife and I couldn't have left without making a few purchases of our own, one of which was a print of a newer piece by local Virginia artist Bob Friedenberg, called "Joei's Garden", based on the beautiful pond in Bob's backyard.  We love Books and Other Found Things, and we love Bob's artwork, more of which you can find at the shop in both original and signed print form. In the meantime, an absolute gem of a track by Doug McComb's (Tortoise fame) band, Brokeback, for your listening pleasure.