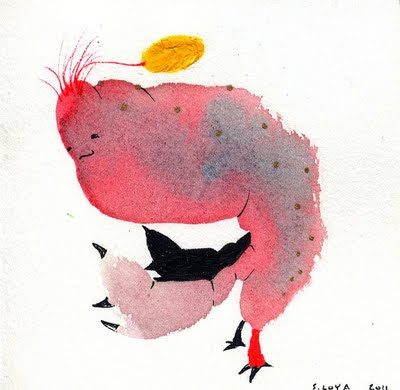 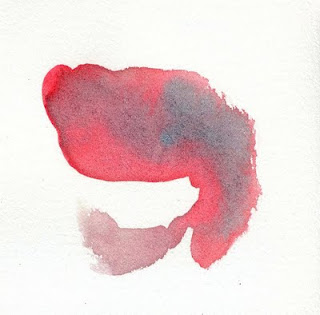 Kind people and friendly monsters make his light glow and his head swell with joy.
This one was interesting because after nearly completing it, which involved adding a face and other various features, I accidentally smeared some peanut-butter chocolate smoothie at the top of the paper. I could have thrown it out and started over again, but I really liked it and thought it worked well with this week's Illustration Friday topic ("swell"). I remember talking about the concept of embracing imperfection and working spontaneously at a Splotch Monster art workshop I did in DC recently, and thought I should try and practice what I preach. So, I let the smear dry then proceeded to plan A, which was to erase the smear with a pink eraser. It worked on pen and marker, so why not smoothie? Bad idea.
I had used a thinner type of watercolor paper, and the smear was still a little wet, resulting in nearly a hole in the drawing. What to do? Embrace the hole and somehow utilize it as part of the monster. So, I used a piece of scotch tape to tape along the backside of the paper, where the hole nearly formed, then carefully colored the messed up area yellow, like those glowing baits you see on deep sea angler fish.  I thought of E.T. and how his heart glows orange when he feels love, and borrowed that idea somewhat for this guy. I think it actually made him more interesting as a result. Sometimes there's nothing better than a happy accident to make it work.
4" x 4", mixed media on watercolor paper, 8/2011
Posted by steve at 9:12 PM