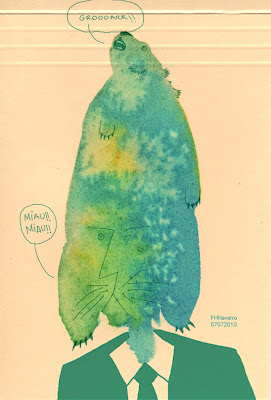 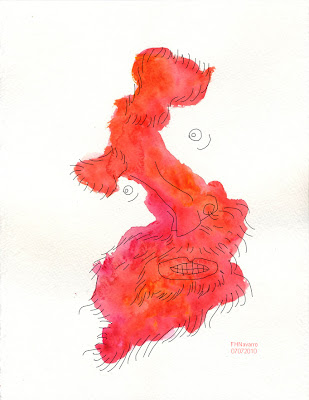 Last night I got an e-mail from artist FHNavarro whose Cachalote Comix site currently features two new smokin' hot Splotch Monster collabs. I love it when other folks get so creative with the splotches and do something I would have never imagined in a million years. Thanks Felipe! Below is some background info on this excellent artist. :

These pieces are by FHNavarro, actually called Felipe. From his childhood he remembers a pen in his hand. In 2002 he published his first fanzine: "Jabberwocky", an adaptation of the homonymous poem by Lewis Carroll. His next work came in 2003, part of his comic online, "The Tragical Comedy of tHe FishMan and the Fish." Four years later, in 2007, appears "Catálogo Cachalote Comix" (Cachalote Comix’ Catalogue), a compilation of sketches, illustrations and comics made between 2000 and 2007. Between 2008 and 2010 FHNavarro did editing, layout and coordination for the digital magazine Sushi Online (http://coleccionsushi.blogspot.com/). The magazine closed with a triple number in February 2010. In March, FHNavarro participating in the joint exhibition, "Painting for Haiti." In June, he participated in the exhibition "6x6 2010" organized by Rochester Contemporary Art Center in New York. Also in June, he published his new silent comic online "Dos hojas" (Two leaves). You can see on the web: http://cocogrococopress.blogspot.com/2010/06/dos-hojas-by-fhnavarro.html.